Best Games for Game Nights at Our Apartments Near Humble, TX 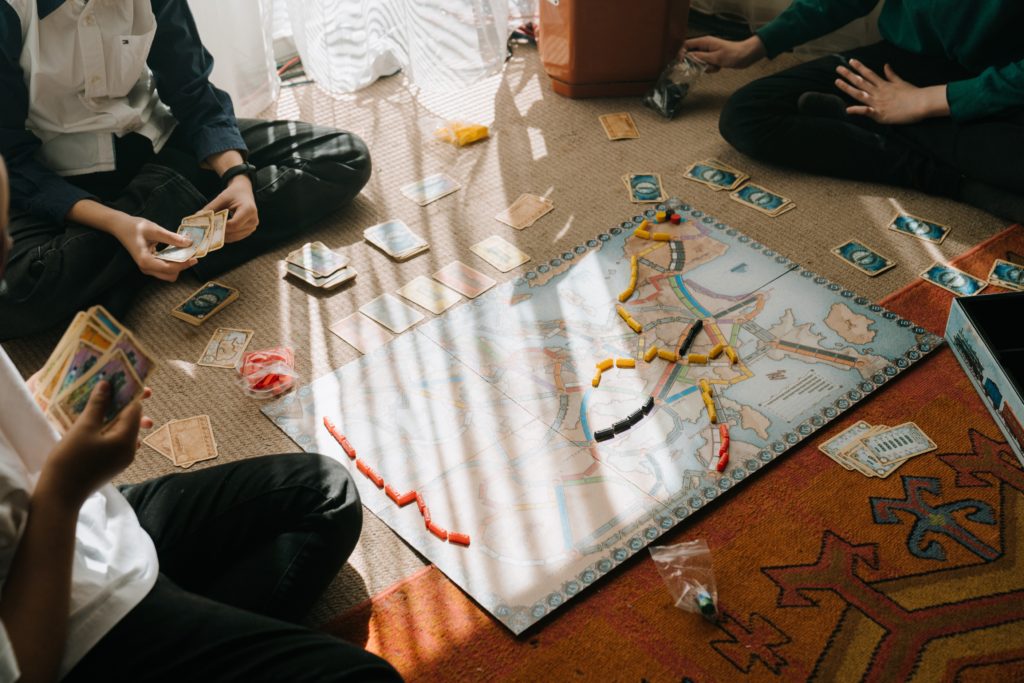 Are you a fan of tabletop games? Sometimes there’s nothing better than a good, old-fashioned game night with friends or family. In the spirit of game night, we’re rounding up some of our favorite card, board, and other tabletop games for groups big and small. Each of these games is perfect for a casual game night hosted in our apartments near Humble, TX.

Do you know anyone else who loves a good game night? Be sure to share this post with them once you’re done reading. Now let’s get into our favorite games, shall we?

Game night doesn’t have to be limited to your apartment! Our resident clubhouse with billiards and shuffleboard is a great place to have a game night with friends or family. Whether you prefer eight-ball or nine-ball, doubles or singles, our clubhouse was designed with game nights in mind.

A party classic, this quick, irreverent, and dynamic card game pits 2-5 players against each other in a battle to see who can survive the longest without getting “exploded” with a—you guessed it—exploding kitten. The game is easy to learn and doesn’t take long to play, so it’s perfect for smaller groups of any skill level and just about any age. Play as many rounds as your group has the appetite for, and stop whenever you like. The flexibility and silliness of this game are two of its main draws.

Codenames is the perfect game for groups with an even number of players who want to challenge their minds. Codenames requires players to make associations between several words that may have only tenuous connections between them in order to guess all their team’s words before the opposing team guesses theirs. This game can be played with anyone, but is especially fun for groups with a lot of shared experiences and interests—groups that share a wavelength, as it were. That’s because clue-givers and guessers will be attempting to read each other’s minds and guess how the other thinks about a variety of concepts.

If your group enjoys games of speed and quick thinking, Catch Phrase is a great option. Competitive but team-based, this game has a nice balance of camaraderie and cut-throat energies, so it can suit a variety of player types. Part hot potato, part guessing game, Catch Phrase rewards those who are invigorated by thinking on their feet and outside of the box. Plus, it can support any even number of players. Odd-numbered groups can still play as long as one person is willing to only be a guesser and never a clue-giver, playing for both teams.

Nobody wins or loses in this drawing game. In fact, the game is most fun when things go awry, making it an excellent game for groups that aren’t necessarily in it for a competitive atmosphere. Telestrations is like having several games of telephone going at once, only instead of whispering to your teammates, you’re transmitting the clue by quickly attempting to draw it. This game is easy to find online or in stores, and comes in a regular set accommodating up to 8 players, or a party pack that up to 12 players can enjoy.

Sometimes called Scum (or other, less repeatable names), President is played with a regular deck of cards and can accommodate 3-8 players, or more if you use multiple card decks. President can be played straight up or as a drinking game depending on your group’s preference. This is one of those card games with a lot of rules variations that you can pick and choose to suit the preferences of your group, and it evokes a spirit of friendly competition as players vie for the most desirable positions. Plus, you can play for just a few quick rounds or as long as you like, depending on how much fun folks are having.

A word of warning, though: sore losers may hate this game, as they will not only suffer defeat, but will also be forced to don a title that adds insult to injury, suffer in-game disadvantages, and, depending on your particular cocktail of variant rules, potentially be forced to perform unpleasant duties due to their position at the bottom of the game’s hierarchy. They’ll have a chance to raise their station every round, and the rankings do frequently change, but be aware that President may not bring out the best in folks who already have a tough time seeing the fun in a game they are losing.

What’s your favorite game for game night? We hope we’ve given you some new options to add to your list! If you found this post helpful and you’d like to keep hearing all our tips and recommendations, you can bookmark our blog page for easy access to all our upcoming blogs. If you don’t want to miss out on community events, updates, or special promotions at our apartments off West Lake Houston Parkway, follow us on Instagram!